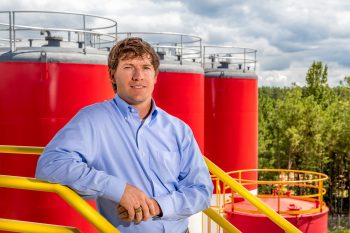 Hood Construction Company is pleased to congratulate Charles Stuart, LEED AP, Hood Senior Project Manager, as being named one of Columbia’s Best and Brightest 35 and Under Class of 2017. The honor, released annually by Columbia Business Monthly, is described as a list of the Midlands’, “…Powerful business leaders under 35 who have excelled professionally and in their communities.”

To be named to a list of individuals believed to have “Accomplished great things in their company, their industry, and in their community” is an honor for Stuart, who has been with Hood Construction for five years. Charles possesses a passion and focus on the training and awareness of the next generation of construction professionals. As part of this, he has volunteered to speak to Construction Science Management classes at Clemson University, facilitates tours of job sites for young people interested in construction, and serves on Clemson’s Industry Advisory Board. An avid outdoorsman, Charles also serves as a committee member with the Columbia Chapter of the South Carolina Coastal Conservation Association. In this role, he has worked to help elevate the local chapter from below average production, to the top producing chapter in the state for the past two years. Charles has also worked with Habitat for Humanity, serving as a volunteer on ten different residential construction projects for families throughout the state.