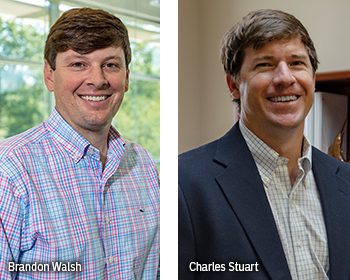 Hood Construction has announced the promotion of two team members. Brandon Walsh has been named Assistant Project Manager and Charles Stuart has been named Vice President.

As Assistant Project Manager Brandon Walsh is broadening his footprint in Hood’s K-12 sector, working with Director of Institutional Services, Ken Brophey, and Vice President of Construction Management, Dean Wilson on projects for Kershaw County School District and Lexington School District One. Brandon has been with Hood for several years and has experience with a variety of projects, both public and private. In his role as Assistant Project Manager, he works with other key team members and Project Management staff throughout the pre-construction and construction process, ensuring budgetary and scheduling goals are met or exceeded on each project.

After nearly ten years with Hood Construction and sixteen in the construction industry as a whole, Charles Stuart has been promoted from Senior Project Manager to Vice President. As part of the Hood Executive Team, Charles has a hands-on role in all facets of construction management, including budget and schedule adherence, contract documentation, working with business development staff on securing new business opportunities, performing budgeting, preconstruction, value analysis services, and also works as Senior level Project Management on Hood’s larger-scale construction projects. His leadership expertise serves to deliver both basic and complex undertakings to the highest level of successful completion.