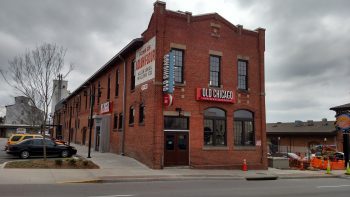 Columbia, SC – Hood Construction is a proud recipient of the Historic Columbia Foundation’s Award for Adaptive Reuse for the renovation of the former Adluh Flour warehouse. Adluh, owned by Allen Brothers Milling Company, is located in Columbia’s Vista at 802/804 Gervais Street and is a widely-known landmark in the area. The two-story brick structure was constructed ca. 1910, and the adjacent mill still remains in use.

The warehouse, having been left vacant for a number of years, underwent a complete revitalization in 2014 and has been rehabilitated into a vibrant restaurant/retail/office business center. In order to restore the historic building’s façade, brick infill of several windows and doors had to be removed, windows replaced, and two new stairwells and an elevator were installed. An outdoor seating patio with canopy was also added as an extension of the first floor restaurant. “It’s been a true pleasure to be a part of this unique building’s revitalization,” said Jeremy Rowe, Hood Vice President of Operations.

Great care was taken to preserve as much of the original heart-of-pine flooring as possible in addition to other specific design specifications – such as installing insulation on the exterior side of the roof to preserve the interior beams. A new roof, mechanical and electrical system, and numerous site improvements also took place as part of the renovation.