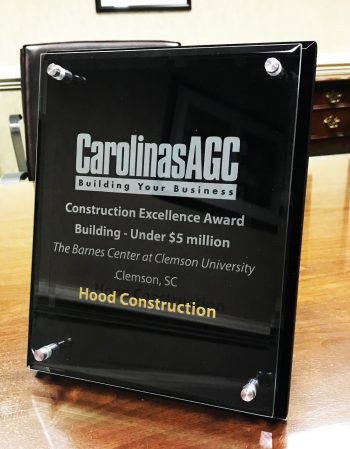 Hood Construction was the proud recipient of the prestigious Construction Excellence Award this month at the Carolinas AGC annual convention and awards ceremony, held in Boca Raton, Florida. The Carolinas chapter of the Associated General Contractors of America introduced the Construction Excellence Award in 2017 to recognize projects of distinction completed in South and North Carolina during the past twelve months. The winners are selected by a panel of CAGC member representatives, who awarded the projects of merit based on their unique challenges, special values, project management, budget and schedule, and safety performance. This year, Hood Construction was among six firms awarded this honor, for their highly successful Construction Management performance on the Barnes Center project at Clemson University.

Completed in early 2017, the Barnes Center is a historic adaptive re-use of a 4,000 SF, circa 1904 structure on the campus of Clemson University. Listed on the National Register of Historic Places in 1990, the “sheep barn” as it was known, is the oldest structure of an agricultural purpose on Clemson’s campus. The complexity of this project, located centrally on an active student campus and of a sensitive historic nature, required strong project and pre-construction leadership by Hood’s project team, lead by Hood Senior Project Manager, Charles Stuart.

Key points of focus on this important project, named for Clemson alumnus and Clemson Medallion recipient, Frank S. Barnes, Jr., included retaining the overall barn-rustic aesthetic to honor the history of the structure, the preservation and restoration of as much of the existing exterior siding, posts and interior columns, and original posts as possible, the refurbishment of the original windows, installation of an all-new standing seam metal roof to match the original, and the addition of insulation and new lighting to better suit the building in its new life as an event and activity center. Every piece of material that was installed on the project was done so intentionally with the goal of enhancing the existing structure which required continuous coordination and oversight. The result is a one-of-a-kind, social destination, on the campus of one of South Carolina’s major universities, in a building now equipped to stand for another hundred years.