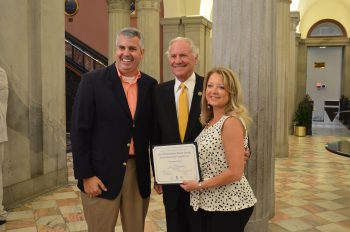 Hood Construction is pleased to announce that the Barnes Student Activity Center at Clemson University, completed by Hood in 2017, has been awarded the Preservation South Carolina Honor Award. The award was presented by Governor Henry McMaster, as well as Executive Director Mike Bedenbaugh, during Preservation South Carolina’s annual event at the State House in Columbia.

The Honor Awards celebrate successful and exemplary historic preservation projects in South Carolina. As the oldest structure of an agricultural purpose on Clemson’s campus, the “sheep barn” as it was known, is also listed on the National Register of Historic Places. Constructed in 1904, the building originally housed livestock and provided learning space for students. In its new role as a student activity center, it has become a vibrant social destination on the University’s campus.

As this was a previously un-conditioned structure, left exposed to the elements for over a century, the building experienced significant deterioration. The Hood Construction team, paired with Clemson University and architecture firm Lord Aeck Sargent, collaborated closely over the pre-construction period to ensure the project’s scope as maximized, while also researching numerous building materials and methods to ensure the historic significance of the structure was upheld. The result is a stunning one-of-a-kind student center – serving one of South Carolina’s major universities … for another hundred years.